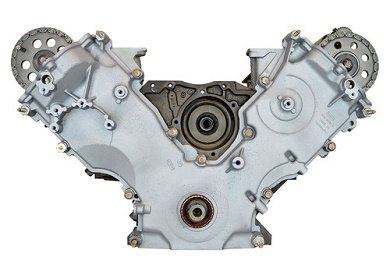 Ford 6.8L engine is remanufactured, rebuilt by Roadmaster Engine World.  The 2 valve V10 engine was made by Ford in 1997.

U-Haul has operated Ford commercial vehicles with the Ford 6.8l engines in their fleet for over 17 years. And they’ve found the engine stands up well. Because U-Haul operates in all 50 U.S. states and 10 Canadian provinces, having a strong dealer network available to service their vehicles is critical. Also Ford is a perfect partner because of their extensive dealer and service network.

The Ford 6.8l engine was produced for 1997 to 2010 model year Ford Super Duty (F-250, F-350) pickups. Eventually being replaced altogether by Ford’s 6.2L V-8. Although the V-10’s power ratings have varied with model year and application. It has been rated as high as 362 horsepower and 457 lb-ft in the Ford Super Duty. It was used exclusively in F-650 and F-750 medium duty trucks for several model years before Ford introduced the 6.7L Power Stroke to this platform.

The Ford 6.8l engine, V-10 is a member of Ford’s Modular engine family, sharing an identical cylinder bore and stroke with the 5.4L Modular V-8. It has similar known issues as the Modular V-8’s, which includes concerns with stripped spark plug threads. For many years, the V-10 offered a powerful, more affordable alternative to Ford’s Power Stroke diesel. Despite lacking the diesel’s performance characteristics, the engine featured attractive ratings at a much lower price than the diesel upgrade. It’s been regarded as a respectable engine platform, despite the fact that it typically provides lackluster fuel economy. It is, after all, a relatively high displacement engine. The V-10 was replaced by the 6.2L V-8 in Super Duty trucks for the 2011 model year, although Ford continues to use the engine in various medium duty (F-650/F-750), chassis cab (F-250 through F-550), and stripped chassis (i.e. motorhome upfit) applications.