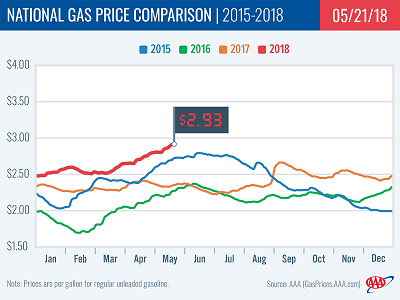 Gas prices jumped 12 cents over the past 14 days, and six-cents since last Monday, landing the national average at $2.93. The highest price point going into the Memorial Day weekend since 2014.

“AAA forecasts nearly 37 million travelers will hit the road for the holiday weekend. Compared to an average of the last three Memorial Day weekends, pump prices are nearly 50 cents more expensive and climbing.” Jeanette Casselano, AAA spokesperson, also says “Trends are indicating that this summer is likely to bring the national average to at least $3/gallon.”

Today, 14 states tout an average of $3.00 or more. Outside of the typical West Coast states, Idaho and Utah, this count includes six Northeast and Mid-West states. Connecticut, Pennsylvania, New York, Washington, D.C., Illinois and Michigan. In addition, Arizona, New Jersey, and Rhode Island. All within four-cents of hitting the $3 mark.

Motorists in Arizona (+70 cents) are seeing the largest year-over-year increase in the region and the second largest weekly increase in the country. Of West Coast states, California (+66 cents) and Hawaii (+62 cents) join Arizona on this top 10 list this week.

For the week ending on May 11, the Energy Information Administration (EIA) revealed that gas stocks fell by approximately 200,000 bbl to 29.7 million bbl. Current inventory levels are 600,000 stronger than they were at the same time last year, with increasing imports helping to buoy inventories. Imports increased by 50,000 bbl to 117,000 bbl last week.

As gas prices continue to increase across the country, two Great Lakes and Central states have averages of $3 or more. Illinois ($3.04) and Michigan ($3.00). At $2.95, Indiana may hit the $3/gal mark before June arrives.

In the region, motorists in Illinois (+65 cents) and Indiana (+63 cents) are seeing the largest year-over-year difference in gas price averages.

The South and Southeast continue to tout the cheapest gas in the country. But prices are at least 50-cents more expensive than this time last year. The chart below lists the five cheapest gas price averages in the region on May 21, 2017 compared to today, May 21, 2018:

With a 1 million bbl draw, the South and Southeast regions have dialed back on gasoline inventories for a third consecutive week. Inventory levels fall to 78 million bbl – the lowest inventory level for this week in May since 2016.

Gas prices are 3- to 7-cents more expensive on the week for Mid-Atlantic and Northeast states. New York and Connecticut both saw the largest jump of seven cents followed by these states that saw a six-cent increase. Maryland, Washington, D.C. and North Carolina.

Compared to a year ago, Delaware (+63 cents) and New Jersey (+62 cents) state gas price averages have the biggest increases of all states in the region.

Despite a nearly 675,000 bbl draw, inventories continue to measure above the 63 million bbl level. That being said, compared to this time last year, inventories are at a 7 million bbl deficit in the Mid-Atlantic and Northeast region.

Utah (-1 cent) was the only state in the country and region to see gas prices drop on the week. Even with that slight decrease, however, Utah ($3.14) and Idaho ($3.16) continue to make an appearance on the Top 10 list of states with the most expensive gas price averages on the week. They also land on the Top 10 list with the largest year-over-year difference in gas price averages. Utah (+71 cents) leads the nation and Idaho (+61 cents) ranks 10th.

Montana (+8 cents) leads the region with the biggest spike in prices on the week, followed by Colorado (+7 cents) and Wyoming (+5 cents). Motorists can expect to see prices continue to increase as tourism seasons kicks off in the Rockies region. Which traditionally means inventory dwindles to the lowest levels of the year.

Motorists can find current gas prices along their route with the free AAA Mobile app for iPhone, iPad and Android. The app can also be used to map a route, find discounts, book a hotel and access AAA roadside assistance. Learn more at AAA.com/mobile.

Roadmaster has been remanufacturing engines for over 50 years to supply quality customer satisfaction.

Take a look at our dependable remanufactured engines process.

Subscribe to our blogs and keep up with Technical Bulletins, Car Care Tips,  engines and transmissions: