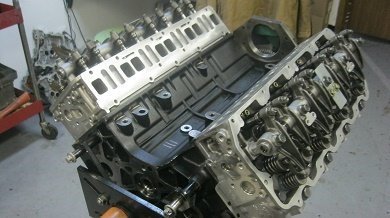 The Chevy Duramax 6.6l engine, also known as the Duramax 6600, displaces 6.6 liters and has been made available in several different versions. Between 2001 – present, 6 versions of the 6.6L Duramax have been produced; The LB7 was introduced in 2001, and was later replaced by the LLY in 2004. The LLY was then replaced by the LBZ in late 2006. The LBZ lasted until mid-2007, when it was replaced by the LMM. The LMM is being replaced by the LML for 2011 model year trucks. All the Duramax engines are 6.6L in displacement and share similar design characteristics. Engine changes generally occurred to meet demanding emissions requirements.

A V-8 diesel generally produces more power throughout a broader RPM range than an inline diesel. Though inline diesels are great for building low end torque, horsepower & torque drop rapidly when they are ran beyond their limited engine speed range. V-8 diesels, such as the Duramax, have proven they can produce peak torque down low, (1,800 – 1,600 RPM & below) while maintaining impressive horsepower & torque output beyond 3,500 RPM. In a light-duty diesel truck, owners benefit from great all around performance & daily driving as well as trailer towing. The V-8 diesel (in general) is the most popular configuration used in light-duty diesel trucks.