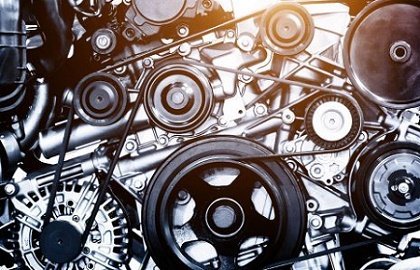 Having a vehicle with belt squeal or squealing can be embarrassing and annoying.  Besides being annoying, a squealing engine belt also is a sign that the belt won’t last much longer and could leave you stranded.

Older vehicles may have belts that are used only to power the fans that cool the radiator. These belts are very similar and may be treated in the same fashion. A noisy fan or serpentine belt squeal , chirping, or squeaking sounds that may be consistent or may come and go. Often, these sounds indicate an issue that may need to be resolved like a loose or damaged belt.

Until the late 1990s and early 2000s, neoprene, the original rubber compound developed into serpentine belts, was the primary material in all belts, both original equipment and aftermarket products. While neoprene was, and still is, a good material for misalignment chirp noise, its flex fatigue characteristics are marginal, especially in hot and cold conditions that roll around yearly.

In early 2000, due to advancements in belt technology to achieve better performance under those extreme winter and summer temperature conditions. And also get more mileage out of the belt, EPDM became the material of choice for all major belt suppliers.

When belt dressing, oils, or solvents are placed on a belt squeal, the belt’s rib surface will initially become lubricated, which may quiet the noisy belt temporarily. But, when the belt dries out and/or the solvent flashes off, the rib surface will become very tacky and aggressive, which will actually cause the noise to return even louder.

Also, when you place any belt dressing, oil, or solvent on the belt, the belt is permanently damaged and must be replaced. In fact, if the EPDM belt’s rib surface is saturated with an oil for a length of time, the ribs will actually swell, which can cause belt noise and/or excessive rib wear.

Instead of using belt dressing, inspect your vehicle for pulley misalignment and/or tensioner issues, as these are the most common causes of belt noise. If you do decide to use belt dressing, then be prepared to eventually hear the belt squeal noise again, and to have to purchase a new belt since the old one will be permanently contaminated.

Most cars today have a single belt that drives the accessories on the motor.  Things like your alternator, air conditioning compressor and power steering pump are all considered accessories to your engine since they don’t help transfer power to the wheels, but do help run other systems in your car.  That single engine belt is called the serpentine or drive belt.  This belt is different from your timing belt because if it breaks it won’t do any immediate damage to your engine or car.

If this belt breaks, your alternator will no longer charge your battery causing the battery light to come on in your car.  Also, your power steering pump will no longer be pumping so your steering wheel will be very difficult to turn.  If your water pump is driven by the serpentine belt then your engine will also quickly start to overheat.  If you notice these symptoms together, shut your car off immediately and coast to a safe place.

In most newer cars, the engine belt tension is created by an auto belt tensioner.  The auto belt tensioner is a spring loaded arm with a pulley on the end.  Once the belt is fitted over the pulley the spring pressure on the arm puts the correct amount of tension on the belt for everything to run smoothly and quietly.  If your engine belt seems loose, squeaks, or wobbles or flaps while your engine is running it’s possible the tensioner either has a worn out bearing or the spring has lost its ability to create the proper tension.

In most cases, the best next step is installing a new tensioner to create the proper tension on the belt.  In this case, it’s often best to replace the engine belt at this time in case the old belt has stretched and because the belt is a relatively inexpensive part.  You may even consider doing this job yourself as it can be done with simple hand tools on most cars and only requires removing 1 or 2 bolts.

Another possible cause of engine belt squeal would be if you have a failing accessory that is causing extra drag on the belt or has a wobbling pulley.  If you suspect this is the problem, try removing the engine belt and spinning the accessory pulleys by hand.  If you can feel play in the pulley, either wobbling or motion in and out, it may indicate a bad bearing and be the cause the noise.

Also, if you feel the pulley has excess resistance, meaning it won’t spin easily by hand, it could indicate an internal failure in the accessory.  If this is the case, you probably will also notice the squeal or squeak when that accessory is taxed.  This would be after startup for the alternator, when turning the wheels for the power steering pump or when the AC turns on for your air conditioning compressor.

The last cause of a belt squeal engine belt is simply an old belt.  The rubber the belt is made out of wears out over time, can become glazed or even cracked which can all cause noise.  If your engine belt looks shiny on the ribbed side or has cracks in the ribs, consider replacing it to see if that quiets things down.