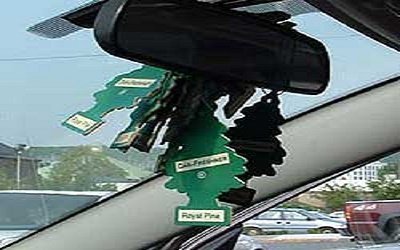 Remember that new-car smell? If your vehicle is giving off an unusual or sickening car odors instead of that new-car smell, follow your nose and find the source of the aroma. Bad smells can lead to expensive repairs or health hazards and shouldn’t be ignored.

Car Odors and their possible causes:

However, that doesn’t guarantee the problem won’t reoccur — especially if it’s being caused by a clog in the drain tube that allows water to drip out under the car. A musty car odors smell also can be caused by carpets that get wet when water leaks into the interior.

Antifreeze has a sweet, syrupy odor, and smelling it inside a car usually means there’s a leak somewhere in the cooling system. The car odors source may not be easy to see. For example, the leak could be from a corroded heat exchanger (aka heater core), which is usually behind the dashboard. The leak could be in the form of steam that enters the cabin, producing the smell and potentially fogging the windows.

Oil could be oozing onto a hot part of the engine or exhaust system. It also could come from overheated brake pads and/or rotors — due either to aggressive braking, pads that don’t retract when you release the brake pedal or the emergency brake being left on while driving. On a vehicle with a manual transmission, the clutch plate could be worn or overheating from riding the clutch pedal.

If you can smell rotten eggs or sulfur, your catalytic converter may have gone bad. The car odors root cause could be an engine or emissions-system problem that made the converter overheat.

The smell of burning rubber could be an accessory drive belt that’s slipping or getting chewed up by a broken pulley or hose rubbing against a moving part. An overheated clutch plate also can smell like burning rubber.

It’s normal to smell a little gas when a cold engine is first started because of incomplete combustion. If you smell gas after the engine is warm, though, the gas cap could be loose or the evaporative emissions control system — which is supposed to contain fuel vapors and recycle them through the engine — could be leaking or clogged. Even worse, gas could be leaking from the tank or another part of the fuel system. Always investigate car odor gas smells you discover when your car is parked before starting the car and potentially igniting the fuel.